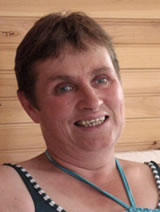 I work for PEI People First. I get groups together. I help members to speak for themselves. And I’ve worked at the Agricultural Research Station, for about 21 years now, in the soils lab.

I went to Birchwood Junior High School. I was in a special class – it was for slow learners. I got kicked out at age 19. They said I was too old to learn. Then I went to OTC (the Occupational Training Centre).

I’ve been married for 9 years. I have two kids. One daughter is 23, and she works. The other daughter is 9, and lives with a family we know. We see her, and spend time with her at Christmas and in the summer. We (my husband and I) picked the family out for her. It wasn’t the same for my oldest daughter. When I was 19 I was living in a foster home. My daughter was an infant. One night I went to a movie. While I was out, the Social Worker came and took the baby away. I was very upset.

Now I live in half a house, downtown. We’ve got pets – 4 cats and a dog. I live with my husband Dan. I’ve lived in a lot of places – other houses and apartments. I also lived in Group Homes, and foster homes. In those places they treat you like a kid. My husband and I have jobs – – sometimes it’s tricky if a job ends or you don’t get enough hours. Having a job is really, really important, to make your own money to pay for food and rent.

Dan works at the fish plant in Souris – he’s in People First. Carolyn, she’s my sister – is in People First – we see each other a lot – we talk to each other every day, on the phone. I have three brothers – I see some of them on the weekend, and the other once in a while, in a blue moon.

Anne is my advocate. We go out every Thursday if it doesn’t storm – we go shopping. Anne was there helping after my baby was born, when we found the family. She did a lot of work for us – she went with me to a Social Worker, and helped me to get in touch with my older daughter.

I’m an advocate, too, with Citizen Advocacy and I’ve been on the board. I like helping people.

For me – I can go out, go for walks, I don’t need anyone with me. But some other people don’t have that freedom. People want to live on their own but workers don’t listen to them – they don’t know how to help them. It’s hard sometimes to get support – they won’t help. Sometimes people call you names – like “retarded” and other of rude things. And in some places people treat you like kids.